We had our final dinner at Simba together and of course our high and low for the day.  What a great way to capture the day and also learn about each other.  We were off at the usual time to head to Mweya Lodge for one night.  Internet has been a challenge but in the whole scheme of things a good lesson in patience.

The first stop in the morning is at the Equator sign to take photos.

As we drove to the official gates of Queen Elizabeth Park, there was a chance we would see some animals.  Well we were not disappointed – elephants.  I was also able to catch a shot of a baby elephant, a little hazy on this hot day but cute none the less. 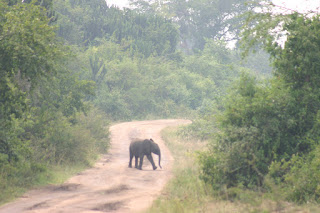 
We watched a lion and a buffalo have a stand off.  The lion would sit down and buffalo would move forward.  The lion would stand up and move on a bit, sit down.  They would just look at each other for a while.  This continued until finally the lion just moved on.  The guide said they were both old and neither wanted to fight!  Dark photos ---sorry.